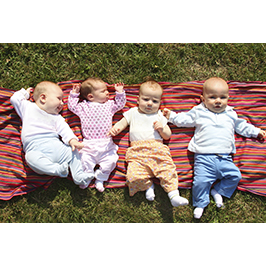 According to the attending neonatologist Anthony Bell, M.D., there were 23 medical staffers in the delivery room when the quads were born, including two obstetricians, four neonatologists, (physicians who are specialists in caring for critically ill newborns) labor and delivery nurses, NICU nurses, and clinical coordinators. Respiratory therapists were on hand to provide respiratory support for the infants, as frequently the lungs are not fully developed in premature babies.